Franklin’s Haynes-Berry House is a treasure trove of little things. Built c. 1889 by hardware merchant Richard E. Haynes, the house is a showpiece of the most modern hardware and decoration Franklin could at that time offer. Haynes had his house built in the Queen Anne style and, at the time of its construction, it was among the most fashionable abodes in Franklin. The late Romantic love of detail married nicely with the Victorian fondness for stuff and gadgetry, and the result can be seen in the Haynes-Berry house.

Luckily for us, most of these original fasteners, tiles, and do-dads still remain. In this blog post, we’re going to explore the Queen Anne style and some of the details of the Haynes-Berry House and how the Heritage Foundation is working to ensure all of these elements remain for future generations to appreciate.

The Haynes-Berry House’s dedication to detail is a hallmark of the Queen Anne style, a late Victorian architectural style that originated in England and swept across the English-speaking world from the 1870s to the 1910s. In the words of architectural historian Mark Girouard, it had “comparatively little to do with Queen Anne…It was a kind of architectural cocktail, with a little genuine Queen Anne in it, a little Dutch, a little Flemish, a squeeze of Robert Adam, a generous dash of Wren, and a touch of Francois I. It combined all these elements and a number of others into a mixture that had a strong character of its own…” (Mark Girouard, Sweetness and Light: The Queen Anne Movement, 1860-1900 (Oxford: Oxford University Press, 1977), 1)

The Queen Anne style quickly became the architectural preference of the burgeoning English middle class, and it’s easy to see why. It’s flashy and playful but still has substance and, with wrap-around porches and a spacious floor plan, Queen Anne is comfortable. It is a house in which a family can make a home.

As in England, newly wealthy Americans, often industrializers, adopted the Queen Anne style. Richard Haynes was not an industrializer, but he was reaping the harvest of industrialization as a hardware merchant. By the 1880s, almost every item sold in his store would have been made in a factory and shipped to Franklin via the railroad.

Nearly every southern town in America has at least one representative of the Queen Anne style. Colloquially, people in the town will often fondly refer to this house as the wedding cake house, and for good reasons. With their stacked facades, curved walls, and heavy ornamentation, Queen Anne homes look as much like wedding cakes as a building can resemble a baked good. These houses stand out, with their steeply pitched roofs, curvy and heavily ornamented porches, turrets, bright red brick, terra cotta tiles and carved stone ornament wherever they will fit.

The Haynes-Berry House. Let’s start outside.

When the Haynes-Berry House was first built, it looked strikingly different from today. It was bright red brick. You’ll have to use your imagination, because it was painted at some point in the 20th century and we haven’t found any images with the original brick. Fortunately, many of the other details remain unchanged. Some of the best are around the front entry. 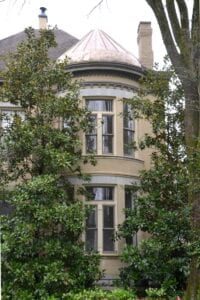 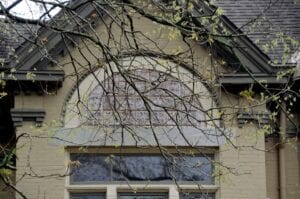 The center gable above the second floor windows boasts several rows of molded decorative terra cotta tiles. Each has a flower stamped into it. Flowers are the most commonly recurring motif in the house. Another notable detail on the entry is the protruding decorative stone arch. 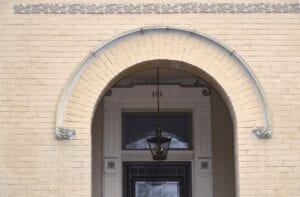 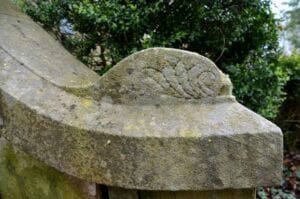 The arch terminates in fantastic carved vegetative stone caps. This motif is picked up and varied on the front step balustrade. On red brick, these cool gray details were decorative accent points. 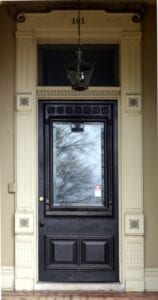 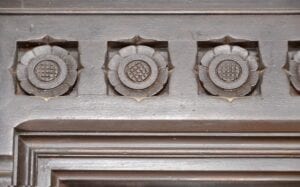 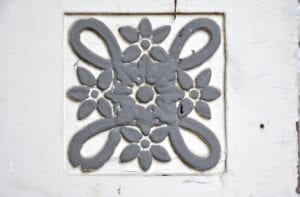 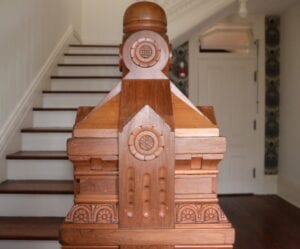 Many motifs that recur throughout the house’s interior appear first on the front door. The most important one is a variation on the Tudor rose, carved in a row across the door’s top rail. The Tudor rose was a symbol used prolifically in medieval English heraldry. This variation is used prolifically in the Queen Anne style and adorns the newel post and the corners of every original door and window frame inside the Haynes-Berry house. 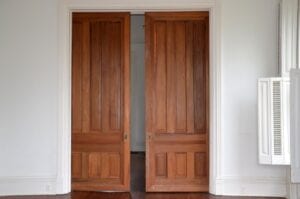 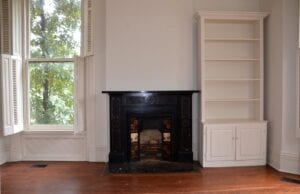 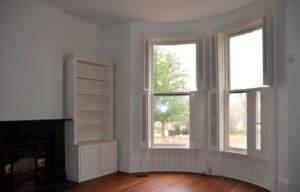 Inside the Haynes-Berry house, the room visitors would have been taken into was the front parlor. As far as interior rooms go, the front parlor is the designated entertaining room and is thus the star of the show in every 19th century house. Richard Haynes had his front parlor embossed with the snazziest details and gadgetry. The mantel is by far the fanciest in the house, boasting decorative tiles. Dominating the south wall is a pair of large pocket doors, which separate the parlor and the room behind it, probably the dining room. When opened, these two rooms become essentially one large room. Both rooms have curved bays that jut out from the walls. The glass panes in the bay window sash are curved to match the curvature of the walls. 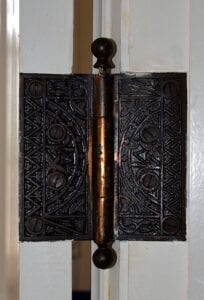 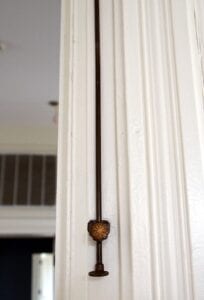 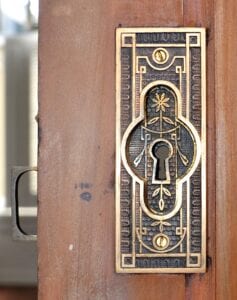 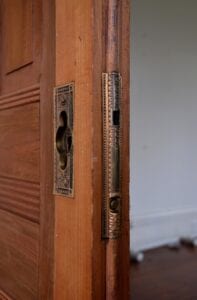 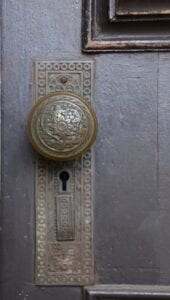 From a preservationist’s standpoint, though, maybe the most amazing thing about the Haynes-Berry House is its hardware. The house retains almost all of its original hardware. From hinges, to doorknobs, to strike plates and even transom-openers, it’s all still there. And it’s this hardware that really exemplifies what the Queen Anne style was all about. It’s the big idea carried out in all the little details.

Transoms over doors facilitated air-flow, keeping homes cool before air conditioning was available. Not only does the Haynes-Berry house still have most of its transom louvers, the transoms themselves still open and close.

The beauty of historic preservation is that all of these wonderful finds will remain intact as this historic home is restored and rehabilitated into Williamson Inc.’s Center for Innovation as part of the Heritage Foundation’s Franklin Grove Estate & Gardens project. The Haynes-Berry house will be refreshed and accessible for generations to come so the Williamson County community can get a glimpse of an authentic Queen Anne-style home, complete with all the trimmings.[/vc_column_text][/vc_column][/vc_row]