Historic Preservation Exhibit on Display at the Old, Old Jail in Franklin, TN 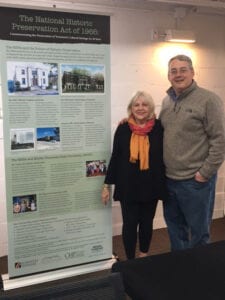 This new exhibition commemorating the 50th anniversary of the National Historic Preservation Act (NHPA) of 1966 will open at 112 Bridge Street on Tuesday, February 7th from 3-6pm and will be open to the public again on Tuesday, February 21st from 3-6pm. The exhibition is the work of the Albert Gore Research Center in cooperation with the Middle Tennessee State University (MTSU) public history program graduate students and faculty to curate a travelling exhibit celebrating the passing of the 1966 National Historic Preservation Act.

The passage of this act launched a national interest in saving America’s historic places for future generations.   It also raised interest in historic preservation nationwide and state and local groups with a mission to save historic places were formed. Here in Franklin, local citizens responded by forming the Heritage Foundation of Franklin and Williamson County in 1967.

For the past year, the Albert Gore Research Center has been working with MTSU’s public history program graduate students and faculty to curate a travelling exhibit celebrating the 50th anniversary of the National Historic Preservation Act (NHPA) of 1966. The exhibit The National Historic Preservation Act of 1966: Commemorating 50 years of Preserving Tennessee’s Cultural Heritage consists of five panels that focus on the national, state, regional, and local impact of the NHPA and preservation efforts since the passing of the act.

Mary Pearce, Heritage Foundation Executive Director, states “We’re proud that the Old, Old Jail has been selected as a location to feature this exhibit which was just at the Brownsville Heritage Center. The timing is perfect to celebrate the passing of the NHPA as we begin the 50th year of the Heritage Foundation’s efforts to preserve our historic places and culture.”

Support for this exhibit was made possible by the Albert Gore Research Center, Humanities Tennessee, Center for Historic Preservation and MTSU Public History. For more information or to schedule a special group tour, contact Linda Childs at 615-591-8500, ext. 116.