Wait! Since When Do Ghosts Have Anything to Do with Architecture?

I know some of you may be thinking; there are no such things as ghosts. Well, that may be true; however, ghosts have recently been seen within interior and exterior spaces of the Perkins-Winstead mansion at Franklin Grove. But it’s definitely not the ghosts we automatically assume would stomp up the stairs, send chills up our spines, or jump out and yell “boo!” You may not even see these ghosts unless you look closely.

Image of the Perkins-Winstead Mansion. Image courtesy of the Heritage Foundation of Williamson County. 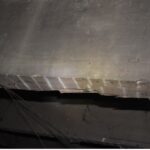 Within the basement of the Perkins-Winstead Mansion, our Preservation team discovered evidence of plaster and lath “ghost lines.” Image courtesy of the Heritage Foundation of Williamson County.

Examples of “ghost lines” of plaster and scrapes lath on the joists in the basement of the Perkins-Winstead Mansion abound in the 1850s construction, leaving our team intrigued during on-site investigations. Image courtesy of the Heritage Foundation of Williamson County. 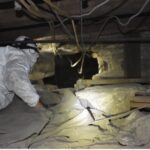 Naturally, I’m speaking of architectural ghosts. Every house or structure carries ghosts of its past – within the walls, ceilings, floors, and foundations. The very materials, including brick, stone, and plaster, can contain incredible history placed by craftsmen of the past for future inhabitants to find. These ghosts are faintly (and sometimes, boldly) visible during architectural investigations of historic homes or buildings. These “ghosts” or “ghost lines” – which are previously removed or “buried” architectural features, once known to previous generations – allows us in the present to link the past and future.  (Side note – future blogs will cover this topic in more detail.)

When walls are plastered, it leaves white lines or “ghost lines” in between the lath and studs. These “ghost lines” continue guide our preservation team’s investigations on the Perkins-Winstead mansion and provide clues regarding the different time periods of construction that, over time, were reoriented or reappointed from other places during various time periods and family occupations.

For decades, the history of the Perkins-Winstead Mansion was rather mystical, enshrouded by ghostly stories, such as the Hines-McNutt Mansion catching fire and burning to the ground during the Civil War, and William O’Neal Perkins building his house on top of the burned-out shell in 1866. However, the past 15 months, our Preservation team uncovered those stories to not necessarily be the case. It was William O’Neal Perkins’ mansion that caught fire in early 1862, not the Hines-McNutt. The Hines-McNutt mansion was part of an African American refugee camp between 1863-1865 and held the first Freedmen’s Bureau school in late 1865, until the Hines-McNutt family returned from their exile to southwestern Virginia.

And, though Perkins’ house caught fire, recent paint analysis findings indicate the house smoked but did not burn to the ground. The Perkins family left Franklin shortly after the fire and did not return to reclaim their property, including their burned-out home, until late 1865. Since they (technically) abandoned their home, only a handful of accounts indicate how Perkins rebuilt, or rather renovated, his antebellum home. One of the more detailed accounts contains information about his purchase of a building on the public square to have it dismantled and reuse materials to repair the house seen today at Franklin Grove.

Finding Ghosts in the Basement

Our team of preservationists, historians, and architectural conservators are resident “house detectives,” climbing in, under, around, and through spaces in search of clues that will better inform us all on the construction and materials used on the Perkins-Winstead Mansion. We then ask ourselves questions, pose hypotheses, and compare our archival research and the historic records throughout our documentation processes to prove or rather disprove, previously-known information about the Mansion.

While in the deeper crawl spaces of the basement at the Perkins-Winstead Mansion, our Preservation team found plaster and lath ghost lines on the joists above our heads. These ghosts may originate from the public square building Perkins dismantled and reused in the renovations of his house immediately following the Civil War. In October 1865, Perkins placed an ad in the local newspaper looking for skilled brick masons to “rebuild” his home. While we do not know who was actually hired to do the work, or exactly what pieces of the public building were used and where on Perkins’ mansion, we do know the ghosts of the past are continuing to inform us in the present so we may ensure its future survival and tell all of its history.

Stay tuned for more “ghostly” reveals of hidden history of the Perkins-Winstead Mansion at Franklin Grove!