“Our greatest legacy to this community will be that everyone will forget we did this, and that what they will remember is what happened when those boys, men, came here on Nov. 30, 1864. That’s hopefully what we are laying the foundation for. That someday there will be a seamless piece of land that tells that story.” – Robert Hicks, Co-founder and President, Franklin’s Charge

It is with profound sadness the Heritage Foundation of Williamson County mourns the loss of historic preservationist and author Robert Hicks, who passed away this past Friday, February 25, 2022. A nationally acclaimed New York Times best-selling author, Robert was the troubadour of Franklin, blending his love for historic preservation, the American Civil War, and literature to champion battlefield reclamation in Franklin. With a passion for people and storytelling, Robert spearheaded the change needed to bring Franklin’s battlefield off life support and into the national spotlight. Co-founding Franklin’s Charge in 2004, he rallied support amongst friends and colleagues, formed organizational vitality, and served as its first President for several years, and more recently, in 2019.

Robert fiercely advocated for Franklin, not only its battlefield but its history. He believed Franklin’s legacy was a story worth sharing and its land worth saving. For many years, he traveled throughout the United States speaking on battlefield reclamation and telling Franklin’s story as only he could do, stating, “Preservation has always been my obsession.”

Robert’s love of history began as a young child, traveling the South with his family. By 1974, he moved to Franklin, and as he once said, “it was a different town than what you see today. Probably 1/3 of Main Street might as well have been vacant or boarded up. In those days, “fresh blood” was recruited into volunteer efforts…I came to understand that community service is a real part of the “rent we pay” as members of any community. After settling in, I got involved in several projects…I should have known myself well enough to know I would become so passionate.”

One of Robert’s passion projects was Carnton, serving on its Board of Directors and later as its President. By 2005, his first novel, Widow of the South, brought national recognition to Franklin and ignited grassroots battlefield preservation. For bringing national attention to Franklin and the heroic story of Carrie McGavock, the Heritage Foundation awarded him its Patron’s Award for achievements in historic preservation at the Heritage Ball in 2014. Additional awards included the Ragland Award from the Tennessee Civil War Preservation Association, the Dozier Award from the Save the Franklin Battlefield, and most recently, the American Battlefield Trust honored Robert with the Edwin C. Bearss Lifetime Achievement Award in 2019. 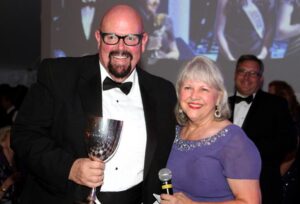 While Robert was highly recognized for battlefield preservation advocacy, he was highly regarded in the field of decorative arts and southern material culture. A lifelong collector, Robert became the first Tennessean named to Art & Antiques Top 100 Collectors in America. His curatorial exhibition, Art of Tennessee, at the Frist Center for the Visual Arts was a seven-year endeavor from conception in his kitchen to its grand opening in September 2003, along with co-editing its award-winning catalog, Art of Tennessee. Demonstrating his depth and breadth for the decorative arts, Robert took the stage at the Heritage Foundation’s inaugural preservation symposium in 2018, introducing Robert Leath, vice president of collections and research at Old Salem Museum and Gardens and chief curator at the Museum of Early Southern Decorative Arts, weaving a colloquial story of arts, culture, and history that set the tone for the entirety of the symposium.

Serving on the boards of the Williamson County Historical Society, the Museum of Early Southern Decorative Arts, the Tennessee State Museum, the Ogden Museum of Southern Art in New Orleans, and the Tennessee Historical Commission, Robert’s contributions to the fields of historic preservation, literature, and museums cannot be understated. After serving his third term as President of Carnton’s board of directors, the board named Robert “the driving force in the restoration and preservation of historic Carnton” in 1997.

As a decades-long resident of Williamson County, Tennessee, Robert lived in his beloved “Labor in Vain” homestead. Nestled in the Bingham community, it became his refuge – a place to write, reflect, and most importantly, gather with close friends and family over good food and even better conversation.

We offer our heartfelt condolences to his family, friends, and the entire Franklin community. We will all miss Robert’s genuine love and steadfast dedication to preserving Franklin’s Civil War history and legacy. May we all carry on his vision of Franklin’s history – to tell its full Civil War story – and continue to reclaim its battlefield.

Follow this link to view his obituary in Williamson Source and here for the one published in the Williamson Herald.