What Waits Behind the Iron Gates 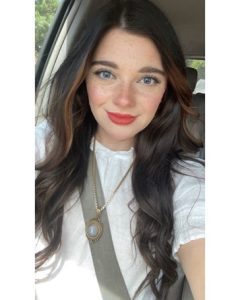 As I walked among the tombstones and iron gates of Old City Cemetery on a warm summer evening, I realized how picturesque the moment truly was. The sun was nearly set behind the huge tree that stands in the center of the cemetery providing a large canopy of lush green leaves for almost all its residents. The fireflies had come out to dance and twinkle among the graves of the dearly departed that are laid to rest in Franklin, TN.

Among these graves was that of William O’Neal Perkins, as well as his wife and children. William O’Neal Perkins was one of the most prominent names among the city of Franklin come the time of the Civil War. He was a big lawyer in the town and resided at what was once known as the Winstead House but is now known today as Franklin Grove. As I starred at the Winstead families’ tombstones, I thought about how beautifully intricate their carvings are and the symbolism that lies behind leaving someone with such a grandiose resting place. William’s tombstone is carved to look like the trunk of a tree with ornate detailing of leaves and vines sprawling throughout the stone. Having a departed father myself, I couldn’t help but wonder why his cemetery doesn’t look quite as picturesque as this historical cemetery? The answer as well as key word here is historical. 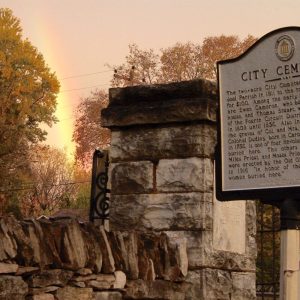 Something each of us is faced with within our lifetime is the inevitable yet continually avoided question: what waits for us after this lifetime on the other side? Is there another side? Unfortunately, this blog post nor anyone else for that matter will ever have the definite answer to that, at least not in this realm. However, when we bury those we love, we choose a cemetery, an eternal resting spot if you will, for their physical frame that once walked this earth. We lay them to rest, and we visit time to time to bring new flowers or give a quick hello to those we miss. After that, we leave and do everything possible to avoid cemeteries at all costs. Believe it or not, this was not always the case throughout history.

Today, the symbolisms cemeteries hold for people vary but often leave feelings of grief, heartache, avoidance and even fear. When cemeteries were created in 1831, there was a very different outlook on them. They served as a meeting ground where the dead and the living could congregate. People would spend hours amongst their deceased loved ones not only grieving but enjoying their present day lives as well and sharing them with the dearly departed. Author and historian Rebecca Greenfield her article in The Atlantic remarks, “People flocked to cemeteries for picnics, for hunting and shooting and carriage racing. These places became so popular that not only were guidebooks issued to guide visitors, but also all kinds of rules were posted.”

At that time in history, people didn’t have as many places to social gather like we do today. There was no Frothy Monkey off 5th at which to meet up on the back deck, there was no Franklin Theatre at which to catch a film. When graveyards were established, they almost seemed like a playground to the townspeople to frolic and explore. What’s funny is even though many would deny it or try to play it off, a lot of people still to this day get a tiny rush of excitement when standing on the outskirts of a historic graveyard. Whether it’s a tiny adrenaline rush from something considered to be spooky or a giddy excitement to be amongst something so historically significant, historic cemeteries still know how to lure a crowd.

Because people planned on spending so much time within the cemetery in that era, it was only natural to put a lot of effort into a loved one’s burial place, considering it was going to be the stomping grounds for a lot of live people. The citizens wanted to enjoy hanging out there while being surrounded by an elegant environment. They weren’t looking to be sad and somber while carriage racing, I can tell you that much. However, the appearances of the cemetery were not the only focus of the townspeople. The location of the cemetery carried a great deal of significance. In Franklin, they purposely chose the north side of town to lay the dead to rest because they were smart enough to know they needed distance between the bodies buried in the soil and the nearest river that would be their water supply. No one wanted cross contamination of the two.

Although historical cemeteries hold much more whimsy and grandeur compared to modern day cemeteries, the one commonality they share is the importance the space holds. Whether it be the 19th century or the 21st century, it is never easy to say goodbye to those we love or once knew. The creation of cemeteries in general brings a certain element of ease to the grieving process. Nothing takes away the pain of losing someone we once loved; however, it is brings comfort to know we can still pay tribute and celebrate the life that once was when we visit a cemetery.