The Old, Old Jail is a building at 112 Bridge Street in downtown Franklin that served as Williamson County’s third jail from 1941 until 1970. From the 1970s on it was used at various times as a highway patrol outpost, an employment office, the County archives, and book storage for the school system. It fell into disrepair and has been vacant since 2008.

Many a prisoner languished away in cells at Franklin’s Old, Old Jail. Notorious prisoners included Betty Burge, Tennessee’s first woman sentenced to the electric chair, car thief Clayton A. “Rabbit” Veach, and Willie York, who served 11 ½ years for murdering Franklin constable Clarence Reed. In 1970, singer Johnny Seay, encapsulated Willie’s life in the back hills of Franklin and criminal activities into a popular country song, “Willie’s Drunk and Nelly’s Dyin.” Etched into several walls are names of former inmates including Veach’s own personal graffiti, visible on the first-floor renovated kitchen wall.

The Jail closed its doors in 1970 and its uses varied until the county shut the doors completely in mid-1990s. In 2013, the Heritage Foundation purchased the jail and by 2016, “The LeHew Magid Big House for Historic Preservation,” was fully restored. Today, the Jail serves as the Foundation’s headquarters and is open for tours Monday through Friday. 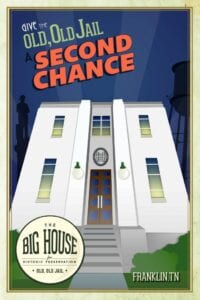