It is with profound sadness the Heritage Foundation of Williamson County mourns the loss of Alderman At Large Pearl Bransford who passed away over Thanksgiving weekend. Pearl Bransford served as Alderman for the City of Franklin since 2007 and was re-elected for a fourth term in 2019.

Bransford was a 30-year resident of Franklin who possessed a genuine servant’s heart. As a nurse at Vanderbilt University Medical Center, Bransford served in leadership capacities for eighteen years, propelling her to lead in Franklin. 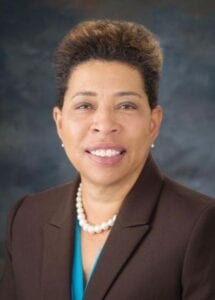 Photo courtesy of the City of Franklin

As a resident of Franklin, she became directly involved with the Natchez Street community, establishing Natchez Place Inc., in 2000. Bransford worked tirelessly with many in and outside of the community to place Natchez Street on the National Register of Historic Places and in the past few years, went door to door candidly speaking with Natchez Street citizens, listening to their concerns for their community’s potential to be within a historic overlay in Franklin.

Bransford modeled her commitment by living in the community, reinvesting in the vibrancy of the Natchez Street historic district and dedicating herself to its people and the preservation of its history and culture. Ever focused on affordable housing, she envisioned Franklin as a place for all people of diverse socioeconomic backgrounds, adeptly advocating for the Hill project in Franklin.

Growing up in West Tennessee with a keen awareness of the realities facing African Americans during the height of segregation, Bransford strongly advocated for strong education in our local schools and the preservation of our most fragile and underserved historic places and stories, stating African American history must be interpreted for all of us to learn from in the present so we may fully understand the past. Bransford gave her full support for the relocation and restoration of the Lee-Buckner Rosenwald School to Franklin Grove so local citizens, school children, and heritage tourists could accessibly engage with difficult history and learn the trials and triumphs of African Americans in Franklin, Tennessee, and the nation.

Bransford considered herself a community activist, serving on multiple commissions and boards including Visit Franklin, Sister Cities of Franklin and Williamson County, Franklin Special School District Board of Directors, and the Historic Franklin Masonic Hall Foundation.

Our heartfelt condolences to her husband of many years, Henry (Hank) Bransford, their three children and grandchildren. We will all miss Pearl’s genuine love and steadfast dedication to our community and its citizens.