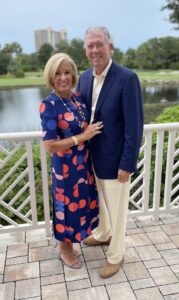 Tom Harrington is a partner in Crown Bakeries (formerly Tennessee Bun Company), having co-founded the company in 1996 with his wife Cordia. Crown Bakeries is a highly-automated, high-speed baking company that bakes over 15 million baked goods daily and employs more than 1,500 people in nine bakeries across the United States. Prior to Tennessee Bun Company, Tom owned C.T. Harrington & Associates, a multi-state CPA firm. He has more than 30 years of experience assisting businesses in making strategic financial decisions in all stages of development. Tom recently retired from his position as the Chief Financial Officer and Chief Strategy Officer at Crown Bakeries. In 2021, Millikin University honored Tom with its Alumni Award, and he won Nashville Business Journal’s CFO Awards Lifetime Achievement Award in 2019. While Tom’s resume is impressive, his dedication to his community is demonstrated through his involvement. Tom served as President of the local Rotary Club, Chairman of the board of Rocketown Ministries and Deacon at First Presbyterian Church Nashville. Currently, he serves on the boards of Millikin University and Lee Company.

Cordia Harrington is the CEO and co-founder of Crown Bakeries. Under her leadership, Crown Bakeries received many awards including the 50 Fastest-Growing Women-Owned Businesses and Nashville Business Journal’s Best in Business Award. Cordia was listed at #93 on Forbes magazine’s list of 100 wealthiest self-made women in 2020. That same year, the University of Arkansas awarded her an honorary Doctor of Humane Letters degree. Nashville Post named her the 2020 CEO of the Year and she was included on their list of “Most Powerful Women” in 2021. Currently, Cordia serves on the Ascent Global Logistics Board of Directors, the Global Crossing Airlines Board of Directors, the Broadcrest Capital Advisory Council and the Belmont University Board of Trustees. She is past chair of the Chief Executives Organization Board of Directors and a member of the American Bakers Association Board of Directors (President-Elect). Tom and Cordia enjoy their five children and eleven grandchildren; four of the families live in Middle Tennessee. They have been supporters of the Heritage Foundation for 25 years.

“We are honored to host this extraordinary event,” Cordia shared. “Friends and family make Williamson County a magical place to live! We are thankful for the Heritage Foundation’s work to preserve this special community.”

The Heritage Ball is the longest running black-tie affair in Williamson County. Each year, approximately 700 guests gather to support and celebrate the work of the Heritage Foundation and to raise funds for future preservation projects. In addition to a seated dinner and dancing, the ball features a cocktail hour and other fundraising opportunities.

Tickets and tables will go on sale in August. For information on sponsorship opportunities, contact our Chief Advancement Officer, Grant Martin at gmartin@williamsonheritage.org. For more information about the Heritage Foundation and additional preservation projects, visit www.WilliamsonHeritage.org.