Preservation Is Home: Preserving the Past & Advocating for its Future (Part 1)

Saving places big and small can leave last impacts within a community. Because when we save places, we save stories. However, preserving homes is equally important. Our homes are time capsules; within its walls hold our cherished memories of celebrating holidays, birthdays, and everyday life. But saving historic homes is not as easy as it may seem. Sometimes, historic homes are threatened by demolition for new development. The mission of the Heritage Foundation of Williamson County is to advocate for saving the places and sharing all stories that matter in our communities. We inspire and engage citizens for why they should care about preserving our historic and cultural resources. Looking back on the multiple preservation projects our organization advocated for over the years, one that is close to home is the historic Herbert house, better known as Breezeway. 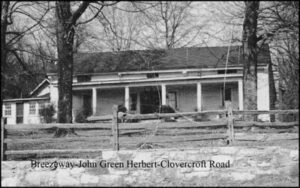 In 1830, John D. and Temperance Herbert built their log house, just off Clovercroft Road. Their log home – a two-storied double dog trot – connected by a breezeway, was finally enclosed by 1890 by John Green Herbert, who raised his large family in the house. When John G. Herbert died in 1934, a Nashville dentist named Gunther Morgan, purchased the property, using it as his summer home until 1950. Once the home no longer was fully used by Morgan, Breezeway sat vacant for sixty years, succumbing slowly to environmental and natural affects. By the late 2000s, the home’s vast farmland faced development while the home faced demolition.

For those who purchase and live daily in historic houses often say they see themselves are stewards of very special places. New owners become advocates for the preservation of historic homes and through their own experiences – their own stories – share how they see themselves shepherding these special places for the next generation, hopeful for a fresh future. This perfectly describes Skipper and Debbie Carlisle, the current stewards of historic Breezeway. They saved the house from demolition in 2010, and after a year-long painstaking restoration including its the original log walls, one of its original staircases, and much of its flooring and windows, are now ardent advocates for why saving historic homes matter. And while they did add a modern addition to the historic home, its seamless flow from the old to the new is brilliant. 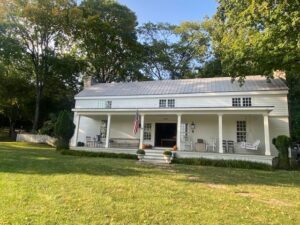 Purchasing a historic home and saving it from demolition sounds like a fairytale story…”and they all lived happily ever after.”  But for the Carlisles, that was not their reality. Issues with understanding city codes and battling with developers were just a few of their concerns. However, the Carlisles looked for preservation partners – the Heritage Foundation of Williamson County, the City of Franklin’s Alderman for Ward 1 Beverly Burger, the City of Franklin’s historic zoning commission and planning and sustainability department – assisted the couple with preserving the home, ensuring its architectural and cultural identity could not be altered. Shortly after its restoration, the Heritage Foundation awarded the Carlisle’s its preservation award historic Breezeway in 2012, followed by the state of Tennessee awarding a Certificate of Merit, its highest honor.

Today, Breezeway is a gem – a historic asset in Williamson County– off Clovercroft Road. But it is now on the real estate market. After much discussion, the Carlisles are selling their beloved home and are currently looking for the right preservation minded buyer who will actively participate in stewarding the home as its next resident.

Stay tuned for next month’s blog post as we feature an intimate interview with Skipper and Debbie Carlisle, their experiences, memories, and hopes for Breezeway’s bright future.

Read Part 2 of this article here >